In Allegiance to Jesus Christ 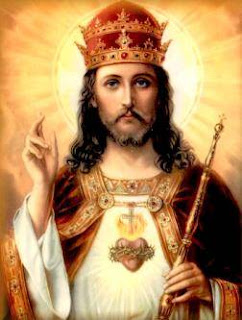 The second chapter of the Rule of Carmel has this to say: "In many and various ways the holy fathers established how everyone, whatever his order or whatever kind of religious life he has chosen, must live in allegiance to Jesus Christ and serve him faithfully from a pure heart and a good conscience."

November 21 is the Solemnity of Christ the King and the last Sunday in the liturgical year.  Next Sunday, November 28 is the First Sunday of Advent.  The whole Church  gathers in churches everywhere to give glory and homage and pledge our allegiance to the King of Kings and Lord of lords.  We acknowledge the kingship of Christ and so I reflect on what this kingship means.

The life of Jesus was a paradox.  He was the God who lowered himself and assumed a human estate.  He was the Master who served his disciples at the Last Supper.  He was the Teacher who showed surprise at the faith of the centurion. He was the innocent man who was crucified for a man-made crime.  And now, a King, flogged and mocked, stripped naked, crowned with thorns, dragged on the streets  and crucified on the cross.  What a pathetic King! A joke of a kingship!  And so they all thought...

And Jesus said: "My Kingship is not of this world. "  The kingdom of God is not of this world.  Living in allegiance to Jesus Christ is living in hope.  It is fixing our eyes on what is to come.  It is the joyful expectation that the promises made are to be fulfilled.  Jesus also answered Pilate: "It is you who say I am a king.  The reason I was born, the reason why I came into the world, is to testify to the truth.  Anyone committed to the truth hears my voice."  Living in allegiance to Jesus Christ means living in truth, conforming our  lives to the truth of the Gospels as we discern these truths in prayer and in the teachings of the Church, Christ's voice on earth.  In our modern times, it has become more and more difficult to hear the truth because there has arisen many voices which claim to be the bearers of truth.  The notion of an objective truth, a truth which is distinct from us and does not change, is vehemently challenged.  We are bombarded by people who mean well but are misguided, advising us to listen to "our heart" and to do what "we think is right."  The phrase sounds good but deceiving.  Decisions, especially moral decisions, made separate from the teachings of Christ as revealed in the New Testament and the Commandments as revealed in the Old Testament, are mere sentimentalism and secular humanism.

This feast of Christ the King is a reminder to all of us that the kingdom promised by Jesus comes with a heavy price.  We profess to follow a King who went through humiliations and unspeakable sufferings.  His was the 'Royal Road of the Cross."  While on earth, "this valley of tears," we cannot escape the Cross, as much as we try, without sacrificing our allegiance to Jesus Christ.

Email ThisBlogThis!Share to TwitterShare to FacebookShare to Pinterest
Tags Christ the King