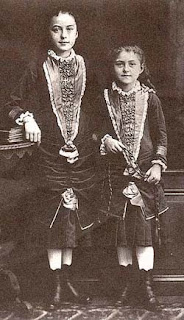 Therese and Celine were more than sisters.  They were soul mates.  Being closer in age, they played together and confided to each other.  They shared intimate moments together in the veranda of their many moonlit nights and shared spiritual secrets together.

When the two older sisters, Pauline and Marie, entered Carmel, it was Celine and Therese who were left behind to care for the aging father.  When Therese entered Carmel at 15, Celine stayed behind to care for Louis Martin.  It was Celine who carried the cross of anxiety and endless concern when Monsieur Martin was afflicted with mental illness.  She had postponed her own personal desire of religious life until after the death of their father.  It was to Celine that we owe the photos we have of St. Therese and the Community photos inside the cloister.  Celine had brought her camera with her when she finally entered Carmel.  She had also endowed us with the original paintings of her saintly sister in the Carmel.  It was curious to note that when Sr. Genevieve of the Holy Face (Celine) entered Carmel and became a Novice, she was under the guidance of her own blood sister, Sr. Therese, who at the time was the Novice Mistress.  Thinking perhaps that they would continue their sisterly bond and close relationship in the cloister, she was hurt when Therese treated her with detachment and sometimes severity in the Novitiate.  She confided to her one day, "I don't seem to know you any more!"  Later on in the Story of a Soul, Therese would confide how much it cost her to have acted this way.  But they were not in Les Buissonet any more.  Sr. Genevieve of the Holy Face died February 25, 1959 at the age of 90 years old.