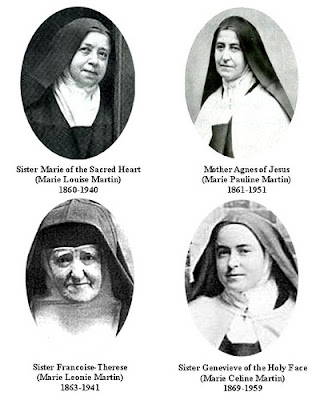 What a blessing it is to have a Priest or Religious in a family. But to actually have four Religious Nuns! Saint Therese's family was one of those tremendously blessed ones. Although St. Therese would tell you that her family suffered much in this world, she would also tell you how God showered them with much grace and consolations. Above are the four Martin Sisters (clockwise): Sr. Marie of the Sacred Heart (Marie Louise Martin)was the eldest of the Martin sisters. It was to her that Therese dedicated Manuscript B of her Story of a Soul. She entered Lisieux Carmel after Pauline had entered there. She died in 1940. Mother Agnes of Jesus (Marie Pauline Martin) was the second of the Martin sisters. Therese was very close to her and took her for her "second mother" after Madame Martin died of breast cancer when Therese was 3 years old. The Story of Soul is full of accounts on Pauline's life and experiences with Therese. She entered Carmel and became the Mother Prioress after Therese had already entered. It is to Pauline that we owe the autobiography of Therese since she was the one who told St. Therese under Obedience to write it. She was also controversially accused of editing the manuscript after Therese died and became the subject of criticism and unjust accusations. She died in 1951. Sr. Genevieve of the Holy Face (Marie Celine Martin) was Therese's soul mate. They were inseparable. Celine took care of Monsieur Martin when he became mentally sick and after all the other sisters had entered Carmel. She was a spirited young woman and Therese constantly worried about her and wrote to her many times to support Celine's plans to enter religious life. Celine received a marriage proposal but Therese, in one of her letters to her, convinced her of the beauty of becoming the Spouse of Christ. Celine entered Carmel after Louis Martin died and became a Novice under St. Therese's spiritual guidance. It was to Celine that we owe the many photos of St. Therese. Celine brought her camera with her when she entered Carmel. This was at a time when photography was first coming to the fore. Sr. Genevieve of the Holy Face was the last to die of the Martin Sisters in 1959. Sr. Francoise-Therese (Marie Leonie Martin) was a difficult child. She was prone to tantrums and was in and out of convents. She gave her family much worry because of her labile personality. Among the Martin Sisters, she was the least endowed with natural gifts. Leonie's life was detailed in a book called "A Difficult Life." She finally entered the Visitation Convent and persevered in it. As a Visitandine, she was known for her deep devotion to her little saintly Sister and was reported to have entrusted her soul to the care of St. Therese at her deathbed. She became a model of gentleness and quiet strength as a nun. Sr.Francoise-Therese died in 1941.
at 1:39 PM