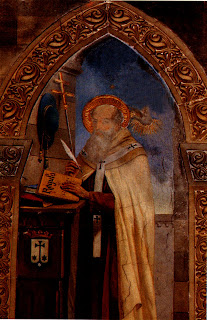 Albert Avogadro was born about the middle of the twelfth century in Parma, Italy, probably to a noble family. He was well educated , especially in theology. He served as a priest at the Holy Cross Abbey in Mortara and was elected Prior in 1180. Four years later he was appointed Bishop of Vercelli. In 1205, he was made Patriarch of Jerusalem. There, in word and example, he was the model of a good pastor and peace-maker.
During this time, Jerusalem was controlled by the Saracens. The Christians needed a patriarch, bu the position was open not only to persecution, but to possible martyrdom at the hands of the Muslims. Albert proved himself not only diplomatic, but winning in his ways. The Muslims of the area respected him for his sanctity and his intelligence.

Because of the Muslim presence in Jerusalem, Albert took up residence in Acre, which was located on the north end of what is known today as the Bay of Haifa. Overlooking the city and the bay is the holy mountain of Carmel. At that time, a group of holy hermits lived on Mount Carmel in separate caves and cells. Albert was asked by St. Brocard, who was the Prior of the group of hermits, to draw up a formula of life for them, a formula of life that would constitute the beginning of the Carmelite Order. In 1209, Albert wrote this "formulae vitae" and united the hermits into one community.
In 1247, it officially became the Rule of Carmel.

In 1214, Albert was summoned to serve in the General Council of the Lateran, but was murdered before he could attend. On September 14th, a disgruntled man he had discharged from a local hospital, stabbed him to death in the Church of Saint John of Acre while he was part of the procession, on the Feast of the Exaltation of the Holy Cross.

Source: Carmelite Calendar
at 3:09 AM

Email ThisBlogThis!Share to TwitterShare to FacebookShare to Pinterest
Tags Saint