Martyrs of Compiegne ("Dialogues of the Carmelites") 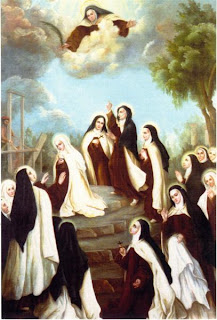 I saw the Opera "Dialogues of the Carmelites" on Broadway a long time back. The production is based on the play by Georges Bernanos and set into an operatic production by Francis Poulenc (1899-1963). The play was based on the true story of sixteen Discalced Carmelite Nuns who were guillotined during the French Revolution. Here is a short historical account I lifted out of the Carmelite Liturgy of the Hours:

"As the French Revolution entered its worst days, sixteen Discalced Carmelites from the Monastery of the Incarnation in Compiegne offered their lives as a sacrifice to God, making reparation to him and imploring peace for the Church. On June 24, 1794, they were arrested and thrown into prison. Their happiness and resignation were so evident that those around them were also encouraged to draw strength from God's love. They were condemned to death for their fidelity to the Church and their religious life and for their devotion to the Sacred Heart of Jesus and Mary. Singing hymns, and having renewed their vows before the Superior, Teresa of St. Augustine, they were put to death in Paris on July 17, 1794."

I confess that I have known the story of the Martyrs of Compiegne for the length of time I have known Carmel.  There were many lines in the Broadway production which spoke to me directly. The protagonist in this story was a woman called Blanche. She was the daughter of the Marquis De la Force. After the death of her mother, being caught up in the panic surrounding the French Revolution, Blanche was forever sealed with an inordinate fear of death and suffering. Even a mere shadow of a servant throws her into a panic and nervous breakdown. She decided to enter the cloister with the hope of finding the peace and security of the cloister walls and to hopefully experience a respite from all her fears. The Mother Prioress strongly reminded Blanche that the cloister was not a refuge to protect them. "Our Order does not protect us, we must protect the Order!" I love this line because it brings home the idea that an Order's charism is preserved through the efforts of its members. We can remain truly Carmelites to the extent we want to be and to the extent that we work at it.

Once inside the monastery, she met a fellow Novice Sr. Constance, who was her opposite in character. Sr. Constance was an enthusiastic, cheerful young novice who welcomed sufferings and nurtured the idea of martyrdom as an offering to God. She had a premonition of dying young. Quite a clash of attitude. But this difference in characters provided me the most uplifting plot in the story as these two opposing personalities were welded together in the scaffold, singing with ONE voice, the hymn of courage. It was a beautiful and inspiring spiritual twist and ending for me. During some early scenes leading up to the climax of the execution, the Mother Prioress was exhorting her spiritual daughters to be brave in facing whatever God had in store for them. But she tempered this exhortation with the line, "Prayer is our duty, martyrdom is the fruit." In other words, for me it meant, "let us go about our business of prayer for that is what brought us to Carmel, and leave God the free hand to grant us the glory of martyrdom, if that is what pleases Him." In other words, we should not seek martyrdom as an end in itself. She reiterated a spiritual truth that aspiring to great things can sometimes be a sign of spiritual pride. The Mother Prioress tried to temper Sr. Constance's longing for martyrdom by words such as these. In this instance, the Mother Prioress stood as a true daughter of St. Teresa of Avila who in her lifetime said many times, "our true martyrdom is the martyrdom of conquering self."

The story was the triumph of grace over nature. It was the story of how Sr. Blanche, a fear-ridden woman, ended up choosing death over freedom because she was given the strength for it in the end. Courage is not the absence of fear but embracing the object feared with the end result of overcoming it. It was the story of how God accomplished great things in simple and obscure women who never sought to win the crown of martyrdom but succeeded in obtaining it.   The Reign of Terror ended a few days after the execution of the Carmelites. We know for certain that their sacrifice was well received by Almighty God and bore fruit for France and the Church.

You can buy the book "To Quell the Terror" by William Bush and distributed by Institute of Carmelite Studies Publications https://www.icspublications.org/

Email ThisBlogThis!Share to TwitterShare to FacebookShare to Pinterest
Tags Martyrs of Compiegne