Feast of the Presentation of Mary


"For a sermon of the Blessed Virgin to please me and to do me any good, I must see her real life, not her imagined life.  I am sure that her real life was very simple.  They show her to us as unapproachable, but they should present her as imitable, bringing out her virtues, saying that she lived by faith just like ourselves, giving proofs of this from the Gospel, where we read; "And they did not understand the words which he spoke to them."  And that no less mysterious statement,"His father and mother marveled at what was said about him." This admiration presupposes a certain surprise..."      Saint Therese of the Child Jesus


The account of the Presentation of the Blessed Virgin Mary in the Temple is principally based on the Protoevangelium of James, which has been dated by historians prior to the year 200 AD. The story relates that in thanksgiving for the birth of their daughter, Mary, Joachim and Anne decide to consecrate her to God, and bring her, at the age of three years, to the temple in Jerusalem. Mary’s presentation in the temple draws parallels to that of the prophet Samuel, whose mother Hannah, like Anne was also thought to be barren, and who offered her child as a gift to God at Shiloh.
Mary remained in the Temple until her twelfth year, at which point she was assigned to Joseph as guardian. According to Coptic tradition, her father Joachim died when Mary was six years old and her mother when Mary was eight. While the story is a legend with no foundation in history, the point is to show that even in her childhood Mary was completely dedicated to God. It is from this account that arose the feast of Mary's Presentation. For the Roman Catholic Church, on the day of the Presentation of the Blessed Virgin Mary, "we celebrate that dedication of herself which Mary made to God from her very childhood under the inspiration of the Holy Spirit who filled her with grace ... ." In the 1974 encyclical Marialis Cultus, Pope Paul VI wrote that "despite its apocryphal content, it presents lofty and exemplary values and carries on the venerable traditions having their origins in the Eastern churches".  (Source: Wikipedia)

Email ThisBlogThis!Share to TwitterShare to FacebookShare to Pinterest
Tags Mary 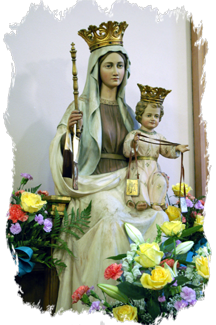