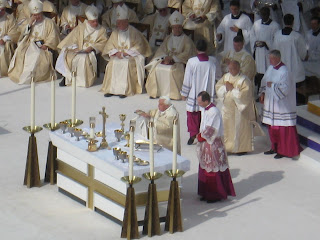 I wrote this article at the time Pope Benedict came to visit the United States in April 2008.  I want to share with you my sentiments then and express in a nutshell my sentiments now.


I was not one of the lucky ones who made it to St. Patrick's Cathedral or Yankee Stadium to see the Pope. But like the rest of other Catholics, I was glued to the television set as I followed his appearances and listened to his homilies. It was a truly awesome feeling to be so close to the Holy Father. His being in the U.S, in particular right here in New York, was an occasion of grace. His presence carried him beyond the limitation of television and his words were just as effective even though it was mediated by technology. Catholics and non-Catholics alike are in agreement that Pope Benedict is a man of God and his message is universal.

My knowledge and impression of the Holy Father go back to his days as Cardinal Ratzinger. His books, even though reputed to be intellectual, are not that difficult to read. They certainly address deeply theological matters but he has the skill of presenting them in an understandable way. My favorites are "The Ratzinger Report", "The Salt of the Earth", "God in the World" and "Benedictus", a compilation of his works by Fr. Cameron. I also benefited from reading his encyclical on "Deus Caritas Est." I am currently finishing his second encyclical on "Spe Salvi." I like to read our Holy Father's writings because they make me think about why I believe the things I believe in. He explains the reason for our faith and logically explores the foundation for those beliefs. His reputation as a pillar of orthodoxy also adds to his appeal. I confess that I was one of those Catholics who thought of him as a rigid and legalistic person. I only found out recently that he was actually thought of as one of the "progressives" during Vatican II. Now that I heard him speak more and have seen him more, his gentleness and humility edify me. For a man of such intellectual depth and height, he exudes humility and holiness. I feel confident in his love of truth and his loyalty to it.
Like Pope John Paul II, Pope Benedict is lovable, admirable and worthy to be called our true shepherd of God's flock.
Now, more than ever, I am moved to pray for him and for all his intentions for the good of Christ's Bride, the Church.

The resignation announced by Our Holy Father saddens me tremendously.  Like the rest of the Catholic world, we mourn the realization that a true shepherd of the Church will no longer be steering the barque of Peter.  But as I was ruminating on this fact, I also had to lift myself up with the truth of our Faith that the Church is the Church of God, and as such, God will never abandon it.  Popes come and go, but the Church of Christ, remains forever!

Pope Benedict is very dear to my heart.  I am truly inspired by his humble, unassuming way.  His intellectual breadth and depth, is second only to his humility and gentleness, a true pastor and shepherd of the flock of Christ.  Many took him for a man bent on keeping the Church in the woods and marshlands of antiquity- someone who opposes progress and moves and feels at ease with the transcendent, but removed from reality of the everyday.  Far from the truth.  His words of wisdom, his penetrating insights, convey the simplicity and centrality of our faith- Jesus of Nazareth.  His ability to bring us back to what truly matters, to make us see as he sees the view from the prism of his vision, is inspirational and outstanding. As Pope John Paul II allowed us to experience the youthfulness, joy and courage of the Church, as he made us experience the reality that it is okay to live out our faith in the public square and be comfortable with it, so did Pope Benedict show us that faith and reason need not be at odds with each other.  In Pope Benedict I learned that we believe in God because it is the reasonable thing to do.

After I read the book "Light of the World", I was overwhelmed by the realization of the weight of the Pope's office.  I went to Chapel and prayed for him, for the Church, for the world.  I was inspired to write him, and just like a child to her father, I poured out my heart to him.  I was overjoyed when I received a reply! Granted, it might have been written by someone from the Curia in Pope's Benedict name, but I was overjoyed nonetheless!

I have only known two Popes in my lifetime- Pope John Paul II and Pope Benedict.  Now, I'm in for a third one.  May God bless our next Pope!